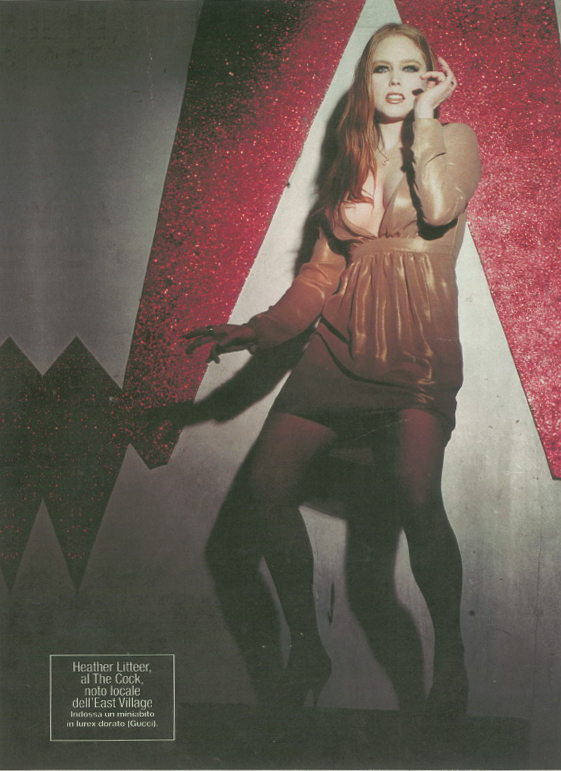 Heather Litteer is an actress,performance artist and chanteuse originally from Georgia but now calls NYC her home. She is a member of Caden Manson’s  Big Art Group touring internationally and in the states. Hebbel Theater, (Berlin,Germany), Festival d’Autome a’ Paris (Paris, France), Wiener Festwochen (Vienna, Austria), REDCAT (Los Angeles, CA), and Yerba Buena Arts Center (San Francisco,CA). Go to bigartgroup.com for a full listing. Including many New York venues and thetare’s such as The Kitchen, La MaMa, Abrons Art Center, Bruno Walter Theatre Lincoln Center, Joe’s Pub, The Wild Project, HERE Arts Center, The New Museum, Guggenheim Museum and BAM Avery Fisher Hall.
Most recently she participated in The Jeff Weiss Tribute,”And That’s How the Rent Gets Paid” and other scenes at The Kitchen, Directed By Brooke O’Hara with Musical Direction by Nicky Paraiso.She is also the recipient of the 2014 Fox Fellowship with The William and Eva Fox Foundation and TCG supported by La MaMa. As a La MaMa resident artist she will be presenting her one woman show “Lemonade” at La MaMa 2016.As Part of her Fox Fellowship this Summer 2015 she will travel to Umbria, Italy to  The La MaMa Summer Symposium to study playwriting with Branden Jacob Jenkins.As well as her continued study of the art of Puppetry with master puppeteer Basil Twist in NY.

Heather’s most recent work with includes Big Art Group’s site specific work The People where Heather plays the raging Clytemnestra was reviewed as part of the TBA Festival in Portland,OR, “Heather is an intense presence as the vampish monologist (as Clytemnestra), evoking more than anything the wild-eyed, big-piped spectacle of singer Diamanda Galas during her occasional eruptions of violent and graphic Sprechstimme.” Willamette Weekly.This show also played  at Abrons Art Center in  NYC and Z Space in San Francisco and was equally well received.

Ms. Litteer has one of the  lead roles as Rei Rei with Big Art Group in “Broke House’ The American Realness Festival; Abrons Art Center. “Can I just stop for a second and say “This Bitch is fierce I couldn’t take my eyes off of her!” GayLetter, NYC

As well as The Prelude Festival at CUNY Graduate Center where she recited and performed Big Art Group’s Manifesto “After Spectacularity” By Jemma Nelson and Caden Manson as published in Yale’s  Theater Magazine V.42 No.3.

She has  presented and interviewed artists for The Queer International Arts Festival at Participants Gallery in a format of a TV Talk show which she will host and will be viewed as part live installation and archival piece. She produces a reading series W.O.(e).R.D. Women of experience read Downtown. She is also Assistant Producer of Special Effects Festival 2014 and 2015 and Curated the performance evening NIGHT BAZAAR at the Festival.

She had a feature in Rolling  Stone Magazine and video feature ( link below) about her participation in the long running NIght Of 1000 Stevie’s  founded by Chi Chi Valenti and  Johnny Dynell.

“That Night Heather Litteer took the stage, performing one of the newly unearthed tracks on Stevie Nicks’ recent album 24 Karat Gold . With a Brass Band behind her , she pummels through “Cathouse Blues” with as Much charisma as the singer she’s honoring.”

Check out her disco track Moustache Ridin’ with Apokalipps including mixes from top DJ’s of NYC. Including Johnny Dynell and Sean B. https://itunes.apple.com/us/album/moustache-ridin/id382300422?ign-mpt=uo%3D4